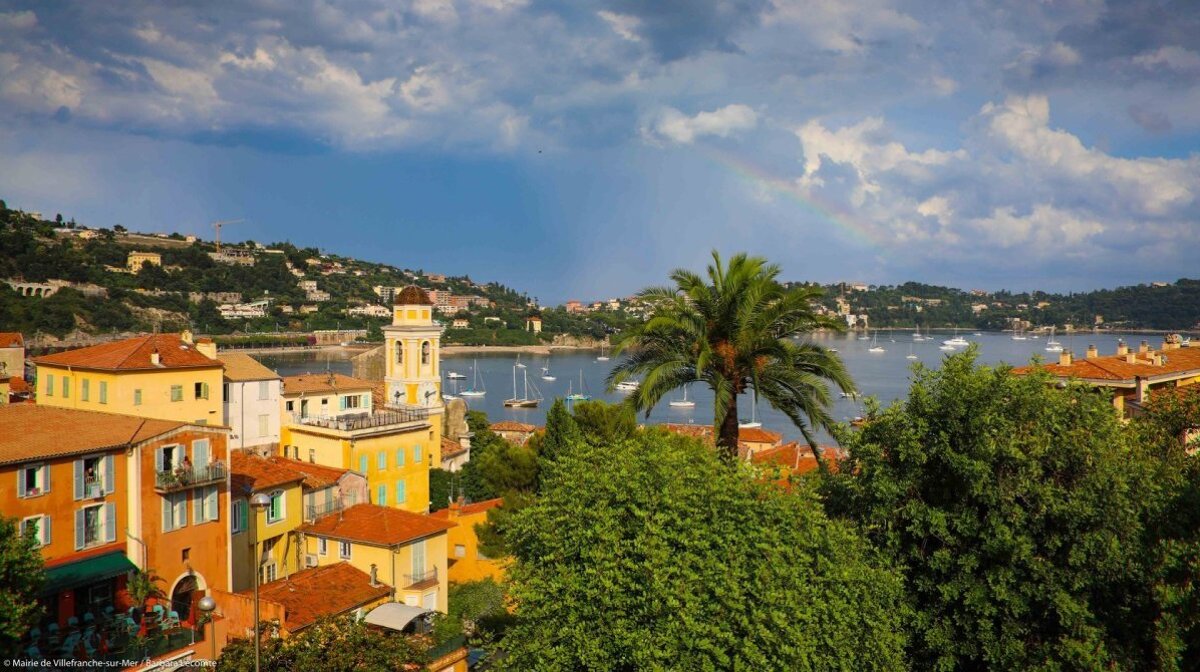 While it's true that some of the spectacularly expensive towns that surround Monaco are a popular vacation destination for the super wealthy, don't let this put you off. There is more to this beautiful part of the coast then the glitz and glamour of Monaco itself.

Countless small towns and villages lie inland and even along the coast that are beckoning you to come and discover them.

The charming village of Eze is located around 9 km from Monaco and, despite the crowds, is arguably one of the most picturesque spots in the region. A little tip: during the high season go early or late in the day to avoid the busloads of tourists. Like many of the villages in this region, Eze is perched like an eagle's nest atop an imposing cliff with breathtaking views of the Mediterranean. Located just above the village, amidst the ruins of the medieval castle, is the Exotic Garden, which is filled with interesting statues of earth goddesses, cacti, tropical plants and winding paths. With its panoramic views across the village rooftops and the coast, it also has one of the best lookout points on the French Riviera and is well worth the admission price. On a sunny day, it is the best €6 you will ever spend during your holiday in the South of France.

The medieval village is entirely pedestrianised with narrow cobblestoned streets and alleys. Following the path up towards the village, you will see a slightly orange church on the hill ahead of you with its square clock tower and pretty shaded courtyard which has picturesque views looking out over the valley. The relatively plain neoclassical façade of the church conceals an impressive interior where you can see several interesting paintings and frescoes. Eze is also home to one of the factories of Fragonard, one of the leading producers of perfume in France. The visits are free and the site is open every day of the year.

In the 1880s, famous inhabitant Frederic Nietzsche used to pant his way up and down the hilly path (now named the "Nietzsche Way") composing chapters to his philosophical opus ‘Thus Spake Zarathustra’. The trail should take about 45 minutes for fit walkers to reach the seaside town of Eze and its train station or the small beach of Saint Laurent d’Eze. Walking up will generally take a lot longer. If you are in the mood to splurge out, there are two exceptional hotels in Eze: the lovely gardens and five-star hotel of La Château de la Chèvre d'Or which has also been awarded two Michelin stars for its gastronomic restaurant, and the Chateau Eza with its private beach. 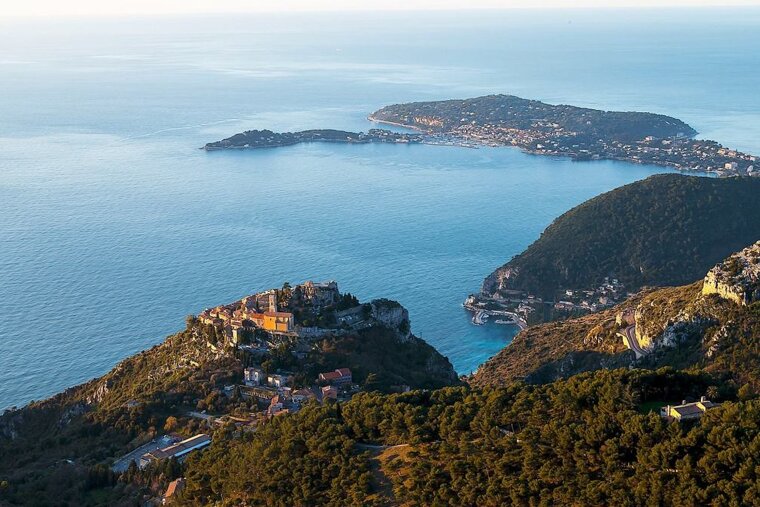 Jutting into the Mediterranean, the seaside village peninsula of Saint Jean Cap Ferrat is about 10km from Monaco and is one of the three major capes of the French Riviera. Perhaps even the most beautiful, it is also one of the priciest in terms of real estate. There are plenty of secluded villas hidden behind high fences, belonging to the rich and sometimes famous. The only villas that is open to the public is the flamboyant flamingo-coloured Villa Ephrussi de Rothschild, built by Beatrice Ephrussi de Rothschild. It gives an interesting insight into how the super wealthy lived during the Belle Epoque era. The walking tour of the gardens here features nine themed gardens and a famous musical fountain which "dances" to some Mozart every twenty minutes or so.

The village itself is rather small but there are many lovely terrace cafes and restaurants along the port. The three beaches which are probably the best attraction for the casual visitor include: Cro de Peï Pin which is the biggest beach located just north of the port; Paloma Beach which is most protected from the winds, has less sun in the afternoons, and is about 5-10 minutes walk from the port; and, finally, Passable Beach which has some pretty views of adjoining Villefranche. Our favourite part of St.Jean-Cap-Ferrat though is its awesome hiking path along the rocky seaside all the way around the peninsula and the breathtaking views that go with it. 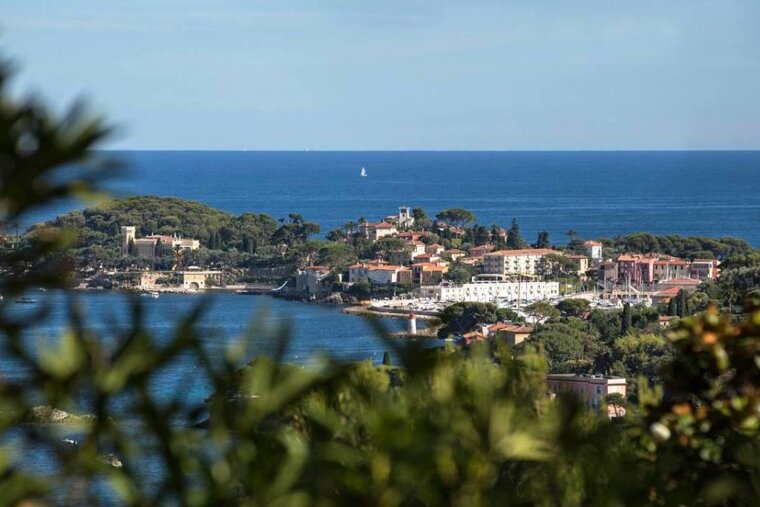 Villefranche sur Mer is another firm favourite, just a short distance away from Saint Jean Cap Ferrat. You could easily do these two villages in a day depending on what type of itinerary you have. With its small, picturesque harbour and long sandy beach with crystal clear mottled blue water, it really is very pretty and definitely deserves a visit. The harbour which is mainly now a pleasure port also has small fishing boats moored. The promenade is filled with a number of bars and restaurants where you can enjoy a coffee or a glass of 'vino' right along the waterfront, whilst lazily watching the world go by.

The old town, which is situated just behind the harbour, is filled with beautiful ancient houses painted in vivid shades of orange, red and apricot, that line steep cobblestoned streets and creates many lovely photo opportunities. As well as meandering around discovering the village, there are several monuments in the town that are interesting to visit, such as the as the 16th-century citadel or walled fortress that stands poised above the sea and the 14th-century Chapelle Saint Pierre, which is considered to be the most beautiful chapel on the Côte d’Azur. Villefranche-sur-Mer is one of the most sought-after areas to reside in and its most famous resident is none other than Tina Turner. The village's attractive location has also been featured in quite a few cinematic productions: Hitchcock’s 'To Catch a Thief', 'Dirty Rotten Scoundrels', 'The Jewel of the Nile' and 'Ronin'. 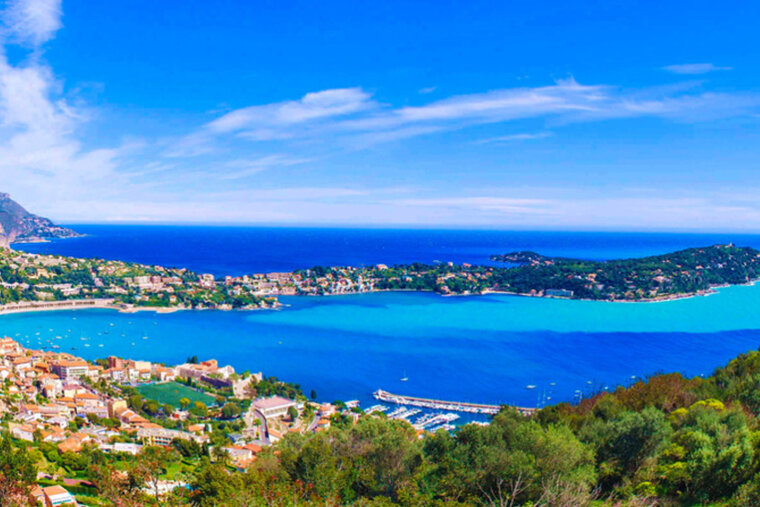 Listed as one of the most beautiful villages in all of France (a country well known for its gorgeous villages), Sainte Agnes is the highest coastal village in all of Europe. Perched high in the steep hills behind Menton near the Italian border, Saint Agnes is an utterly bewitching place of cool stone alcoves and high walls offering magnificent views across the Italian and French Rivieras. Spend a few happy hours exploring the narrow lanes and vaulted chambers, dipping in and out of French boutiques and glamorous art galleries. It would be a shame not to settle in for a coffee or meal in one of the terrace cafes to soak up the view.

The nearby village of Gorbio is also definitely worth a visit, and the keen hikers among you will be delighted to discover the walking path between the two. This medium difficulty path is sometimes closed due to landslides from wet weather, so check ahead. 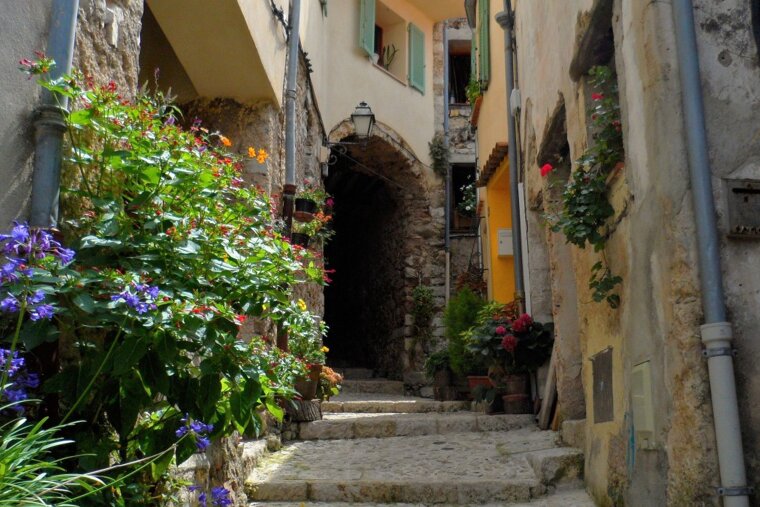 If you intend on making Monaco your base, then a trip across the border into Italy is a definite must-do. Whilst San Remo and Ventimille are the most frequented border villages and easily accessible by train, our personal favourite is Dolceacqua, a little further inland. Only a 40-minute drive from Monaco and an hour away from Nice, Dolceacqua is a small village spread over an area of 20 square kilometres, located in the Liguria region of Italy in the province of Imperia. It is only a short distance north of coastal Ventimille, very close to the French border and, like many of the other villages of this region, was built as a fortified village with the impressive Doria castle dating back to the 11th century. The easiest way to explore the village is on foot, walking through the beautiful cobblestoned streets lined with old stone houses.

The village is divided into two parts by the Nervia river and connected by the Ponte Romano, a beautiful 15th-century humpback bridge made of bricks. Terra is the oldest section directly beneath the castle with tall ancient houses and vaulted passages, whilst Borgo is the more “modern” part of town on the opposite bank. In the late 19th century, Monet was said to have visited Dolceacqua several times to paint pictures of the town's bridge, castle and houses. U Fundu and I Gumbi da U Zena are two traditional “agriturismi” in the Terra part of the village which have a great reputation amongst the locals for great Ligurian food at reasonable prices and also sell their own olive oil. Since Liguria is known for its excellent quality olives, we would definitely recommend a bottle or two to take back home with you. 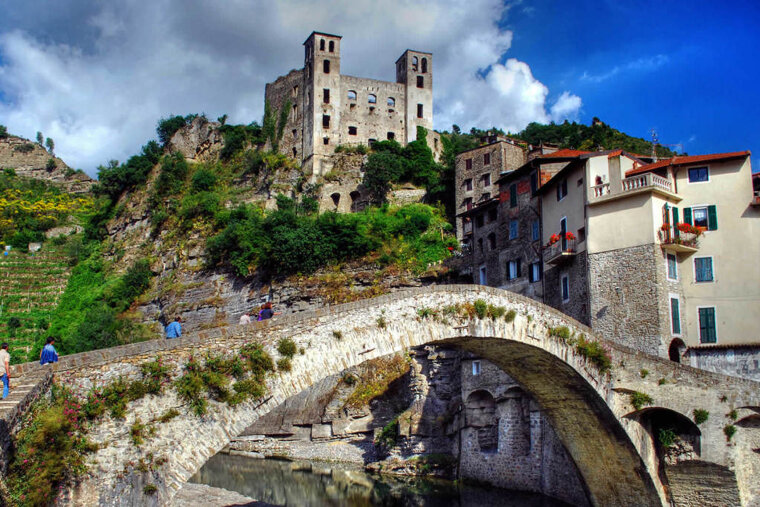 That’s our pick of some of the most stunning villages within a fairly easy reach of Monaco. If you want to read about the most beautiful villages to the west of Monaco, read our Top villages to visit from Cannes.