There are only two ports in Monaco: the huge (and hugely glamorous) Port Hercule, and the charming Port Fontvieille. There are also some excellent marinas in French territory within a very short cruise of Monaco, which we’ve also included in this guide.

Port Hercule
Monaco’s Port Hercule is one of the greatest superyacht marinas of the world. Used as a deep water port since Roman times, today the port sits nestled under the steep Monegasque cityscape of high-rises, grand hotels, and the cliff-top palace perched on the Rock of Monaco.

The port has 700 berths, of which 30 are visitor docks according to availability. Port Hercules has 110 berths accommodating yachts over 24m, with its largest berth able to accept a yacht up to 130m in length. Marina depths range from 5m to 40m, so all drafts can be accommodated.

Getting a berth in Monaco is rarely cheap or easy-with major events such as the glamorous Grand Prix in May and the Monaco Yacht Show in September making berths there fiercely contested and the berthing rates not for the faint-hearted. To be sure, getting a berth for the Monaco Grand Prix is one of the great yachting experiences on the planet, when the superyachts gather cheek-by-jowl along the edge of the racetrack, the F1 cars tearing past the assembled yachts crowded almost to sinking-point with cheering people.

Port Hercule is lined with restaurants and bars creating a vibrant atmosphere, while the boutiques, casinos, and Michelin-starred restaurants of Monte Carlo are only a short walk away. Also worth a look is the stunning Yacht Club de Monaco, which was designed by British architect Lord Norman Foster in the shape of a boat.

Port de Fontvieille
The other port of Monaco, Port de Fontvieille, lies just around the headland and is much smaller than its famous sister, but this marina is also very beautiful and offers better shelter from easterly swells. Fontvieille marina, crowded with restaurants and overlooked by residents apartment buildings, has a real village feel rather than that of a working marina, and in fact, you’ll have to pop back around the corner to Port Hercules if you want yachting necessities such as fuel or a shipyard. Berths in Port de Fontvieille are reserved mainly for residents so visitor availability is limited.

Port Hercule and Fontveille may be the only two ports in the tiny principality of Monaco, but if you sail just around the corner from Monaco into France in either direction you’ll find some excellent smaller marinas stretched along the steep coastline.

Menton
The beautiful town of Menton offers two very good marinas right by the Italian border, and you’ll find berthing rates more competitive here than in most other ports along the Riviera. Both ports have restaurants, a lovely setting and a friendly atmosphere. Port de Menton Garavan is the newer and larger of the two marinas, with 770 berths, of which 170 are public. The marina can accommodate yachts up to 40m in length and 3m in draft. Port Municipal de Menton (also called Le Vieux Port), is the public port of Menton offering 596 berths, of which 100 are reserved for visitors. The port accommodates vessels up to 30m, with a maximum draft of 6m.

Cap d’Ail
While it’s in French territory,  Cap d’Ail Marina, Port de Plaisance de Cap d'Ail, is so close to Monaco that the only road access is actually through Monaco rather than France. This is a charming little deep water port catering for yachts up to 60 m as well as lots of small local boats. It’s a friendly, calm and convivial marina with less bustle and than neighbouring Monaco.

Beaulieu-sur-Mer
The pretty town of Beaulieu-sur-Mer is only 5nm from Monaco in the direction of Nice, and has two marinas, the large and vibrant Port de Beaulieu and the small and picturesque Port de Fourmis. Port de Beaulieu caters for 750 vessels up to 25m in length and with a maximum draft of 5m. It has excellent facilities and a brilliant selection of restaurants and yachting businesses right in the port, creating a wonderful atmosphere for locals and visitors alike. Port de Fourmis is a small and very pretty marina sitting under some magnificent villas. Port des Fourmis has 260 berths for small vessels with a maximum length of 12m and a maximum draft of 1.5m.

Cap Ferrat
Port Saint Jean Cap Ferrat has 581 moorings for yachts up to 30m in length and a maximum draft of 4m. While there are 205 public berths in this number, it can be difficult to get a berth in the busy summer months. Cap Ferrat is a very prestigious harbour in the shadow of some grandiose villas and has a charming pedestrianised area with upmarket shops and restaurants nearby.

Villefranche
La Darse Marina: The spectacularly pretty deepwater bay at Villefranche has a small capacity marina which can accept yachts up to 34 m. There are 540 moorings with a maximum draught of 4m, and 5 superyacht berths. While it is generally difficult to find a berth in La Darse Marina in the summertime as the berths are privately owned, the bay also offers wonderful anchorage that is very sheltered in most conditions (with the exception of a strong southerly).

Summary
There are plenty of boat berths in Monaco and in marinas along the coastline nearby, making this area an ideal place to stop and explore this gorgeous part of the French Riviera. With a glamorous address, stunning scenery and plenty of yachting facilities and infrastructure, Monaco is a wonderful destination on your yachting holiday. Just remember to book early!

For marinas at Nice and further east along the Riviera, see our Nice, Antibes, Cannes and St Tropez websites.

Ad
Ad
Got a Monaco Question? 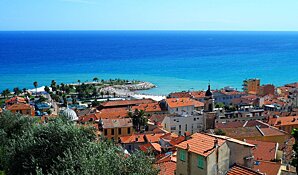