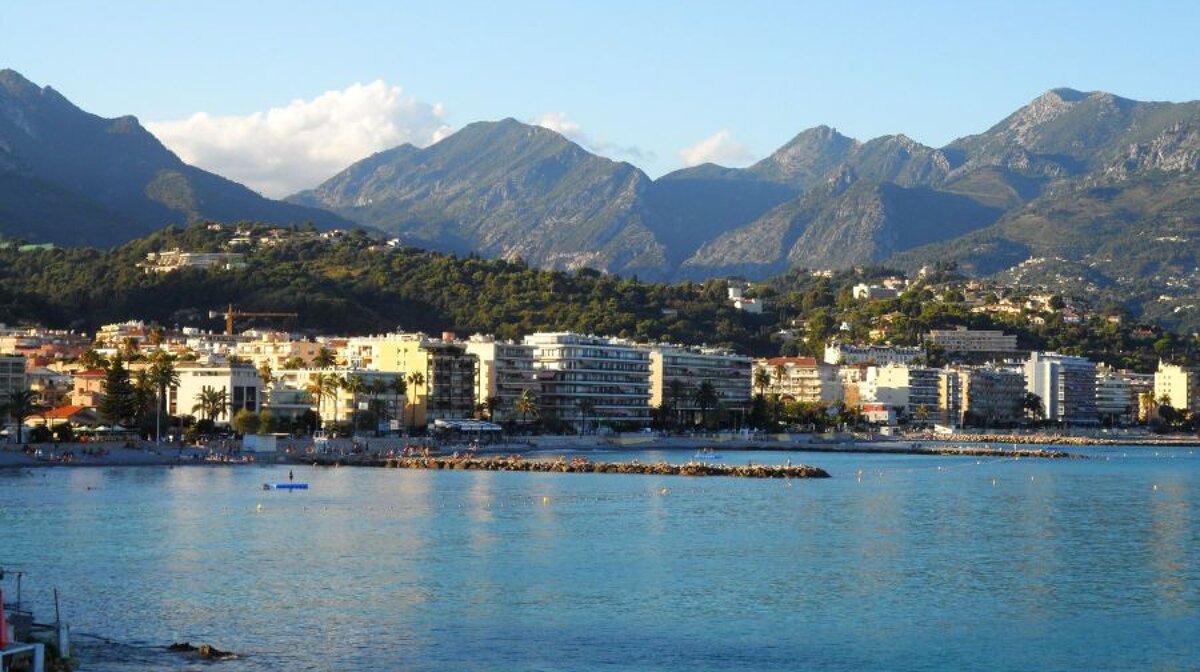 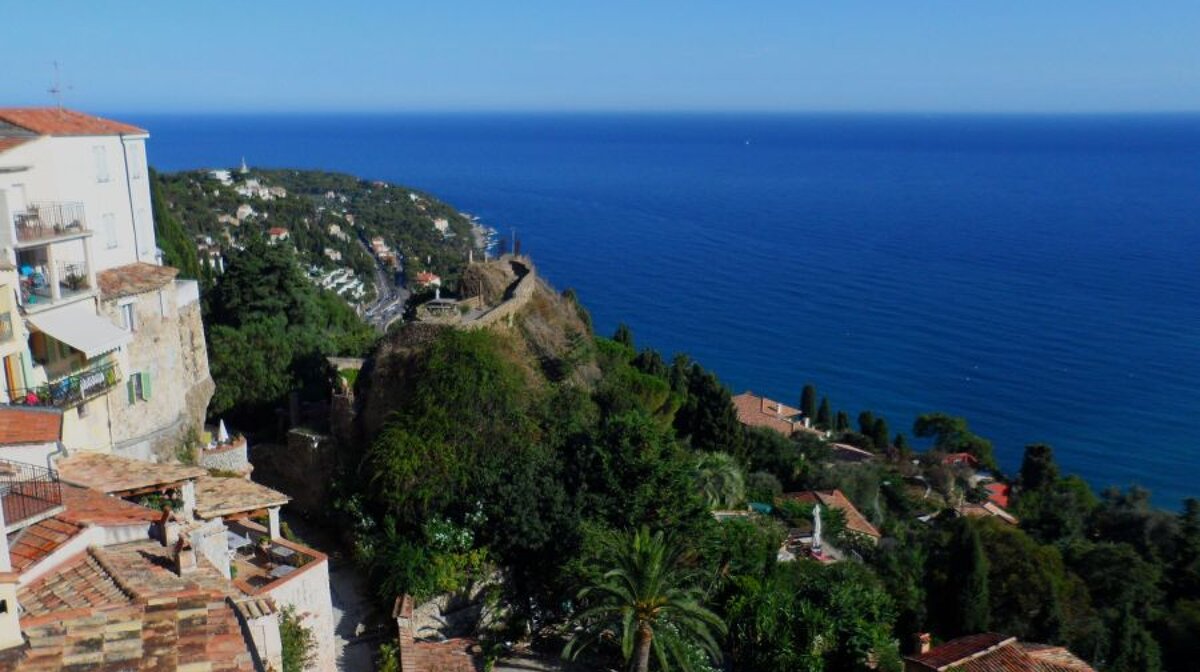 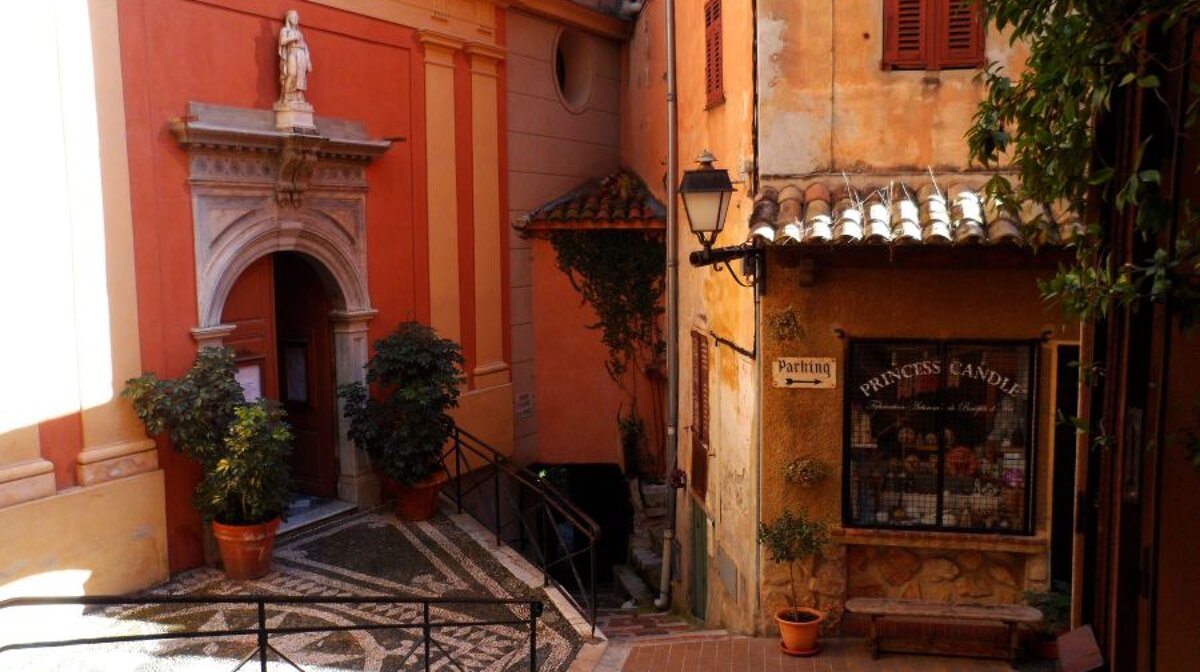 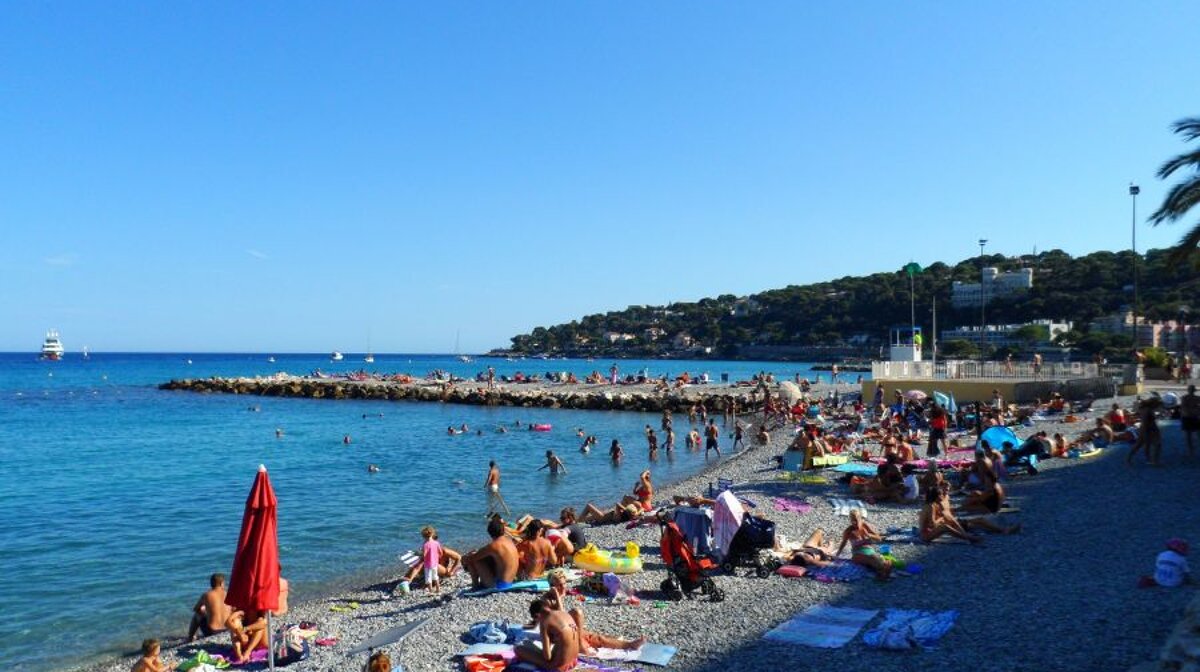 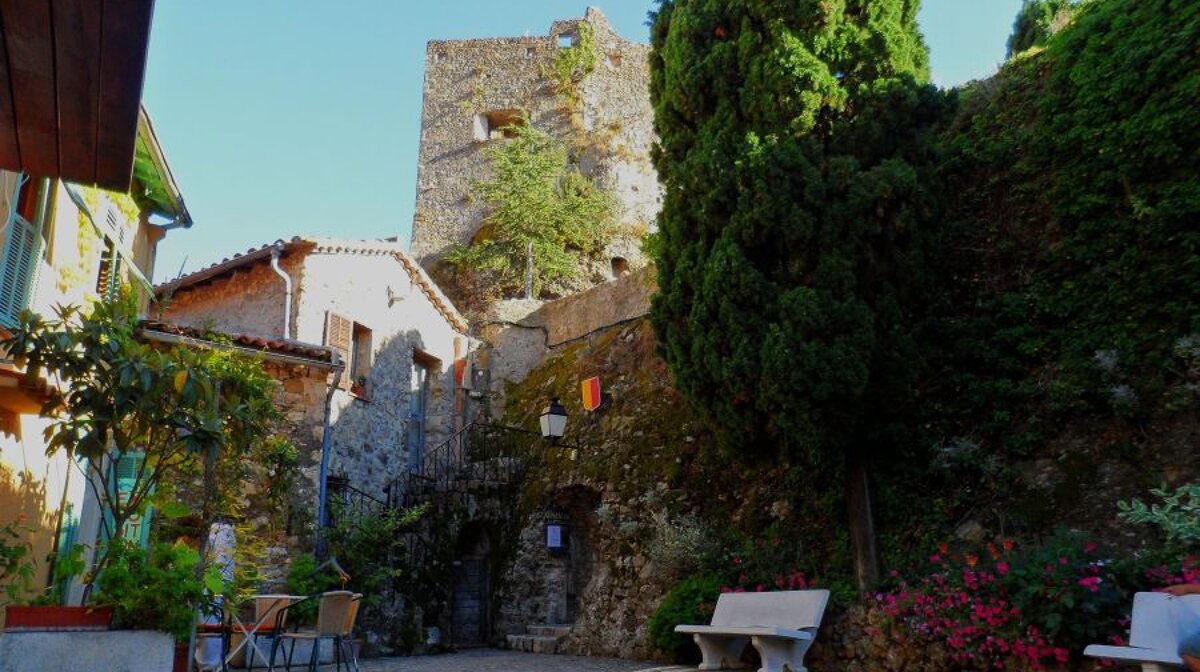 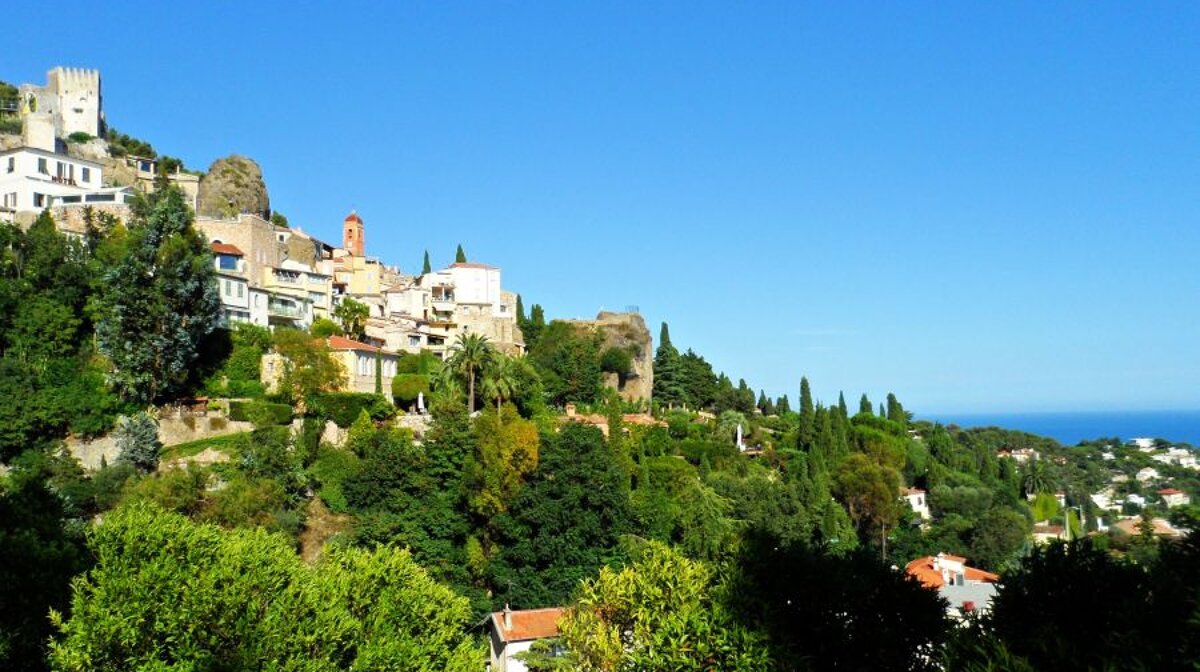 Roquebrune-Cap-Martin lies between Monaco and Menton, and like so many towns on this dizzyingly steep section of the Riviera, has distinct parts - in this case, three!

Perched high above the coast, you'll find the medieval village of Roquebrune, a very pretty and extremely atmospheric 10th century village with spectacular views. You'll find a maze of narrow alleyways to explore with pretty squares and charming statues randomly distributed amongst the streets. Below is the forested headland of Cap Martin, where grand Belle Epoque villas sit beneath the cool pines. Down on the beach you'll find the resort town of Roquebrune-Cap-Martin, where most of the accommodation and new apartment blocks sit in front of a stony beach.

The modern town of Cap Martin is as lively and bustling as any along the Riviera with bars, restaurants and ice cream stalls lining the seafront. Most of the beach is free access and they have a designated “Handiplage” section where those with disabilities can access the water safely and with assistance.

The village of Roquebrune has truly kept its medieval heart. Ancient stone staircases climb between cool narrow laneways and disappear through dark vaulted archways under houses. Guarding the town is an imposing 10th century fort that seems to have grown from the rock, and through the jumble of stone buildings and belltowers are glimpses of the deep blue Mediterranean far below. The main square offers stupendous views down on Monaco and across to Menton and the Italian border. On Cap Martin, luxury villas dot the rocky coastline among the pine trees and olive groves, a legacy of the Belle Epoque years when Cap Martin was considered the most glamorous Riviera resort for the rich and famous- Princess Eugenie, Winston Churchill and William Butler Yeats were among those who participated in the glittering social life. Today, it is more tranquil- although the property price tags certainly won't make you feel that way. In the newer beach resort down at sea level, apartment blocks dominate the older buildings, with bars, restaurants and ice cream stalls lining the seafront.

The ancient village of Roquebrune Cap Martin dates from prehistoric times and is home to one of the oldest human settlements in Europe - the Caves du Vallonnet. The present village grew from Medieval times and is centred around the castle, Château de Roquebrune. Originally constructed in 970, the castle is built into the rocks and is open to the public for a small entry fee. The views from the top out towards Monaco are pretty spectacular.

NB Check with the tourist office before visiting the Caves du Vallonet as they are often closed for excavations.

There are a couple of private beaches and restaurants towards the Cap end of Carnoles beach - family-run Le Hippocampe is popular for its good quality home cooking and fantastic views of the bay. From here you will also find the start of the Corbusier walk, a beautiful and easy stroll around the headland that takes you to Monaco. The main beach, Carnoles, runs along the front of the town and is the most popular. There are two others, much smaller and more secluded that are also worth a visit.

Things to Do in Roquebrune-Cap-Martin

Cap Martin is the start of the Corbusier walk, a beautiful and easy stroll around the rocky headland that takes you to Monaco (about 2 hours one- way.) There are also a number of tougher hikes starting from Roquebrune Cap Martin that head off into the mountains beyond the old village - you can access the start of the GR51 from here. Roquebrune is also popular with road bikers and there are some beautiful climbs in the area. Check out our hiking and cycling routes.

For those wanting organised sports, the Monte Carlo Country Club is located in Roquebrune Cap Martin; it has tennis and squash courts, snooker, golf practice and a pool and spa facilities- all with stunning views over the Med. This venue hosts the tennis Monte-Carlo Masters.

If you’re looking for somewhere atmospheric to have dinner then try Au Grand Inquisiteur, a tiny stone vaulted restaurant tucked away up near the chateau - it’s so small that the kitchen is in another building on the opposite side of the street! Les Deux Freres, meanwhile, has mesmerising terrace views across the coast and offers up French gastronomy, while elegant Elsa has won a Michelin star for its wonderful use of fresh and local produce- and it's 100% organic. For something less high-falutin but still delicious, head to Euro Pizza, for some of the best pizza, bruschetta and salads you'll find on this side of the Italian border- and refreshingly cheap!

Where to Eat in Monaco

The 'nightlife' high up in Roquebrune village is fairly if not completely tame; drinking a glass of good Provencal wine while watching the twinkling lights of Monaco and listening to busking accordian players is probably much the extent of it. Down in the beach resort there are bars along the seafront which have a bit of a buzz in the summer months. For a seriously glamorous night out, the Monaco side of Cap Martin is home to some very ritzy beach clubs like Sea Lounge- this is where the superyacht set of billionaires and models come to drink cocktails, smoke shisha pipes and lounge about listening to DJ's in front of the shimmering sea. And once in Monaco, there is plenty to do-see our Monaco nightlife guide for more details.

There are several two and three star hotels in the resort and a handful of small hotels and B&B's in the old village. For something more swanky, head more towards Monaco.

Be very aware of which part of Roquebrune-Cap-Martin you are booking in or travelling to, for the beach resort and the medieval village are 2 kilometres ( and significant altitudes) apart, and have extremely different characters. There is a train running from Nice, however, the train station is down by the sea meaning a very steep climb if you want to go to the old village. There is a bus (no 100) that will deposit you below the village (but the remaining steps are very steep), or take the bus no.21 from Monaco or Menton. If driving, take either the Grande Corniche road from Nice or the A8 exit off the motorway.